What I've been up to:

There is just an insane amount of things that need addressing these days so I figured I'd use a Saturday Morning Round Up post to talk about what is going on with my world and events and whatever pop culture I feel like discussing.

First of all, it's week three of the writer's life. For those that haven't been up to speed, on the advice of M. Todd Gallowglas, I quit my 9 to 5 job to live without a safety net and just write. So far it's worked out great! Fanboy Planet featured a piece I did on Cyborg and autism. The Claims Department featured a piece I did on 80s/90s Comics. Chris Garcia also left me an open invite to submit articles for future zines. I've hit my stride in writing essays so that I will be providing more over the next year. I'm having an excellent time writing them. 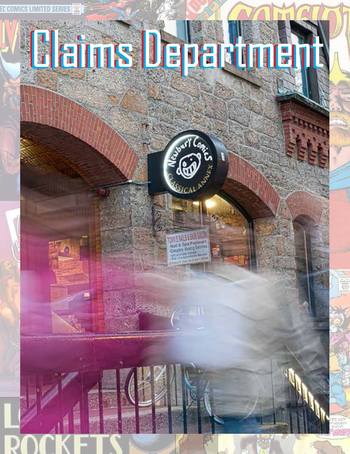 So what did the last three weeks earn me? I finally completed my second novel. In fact, I finished it at record speed. I have already powered through mapping out most of the timeline to make sure it matched up without any conflicts to the first book's timeline. I then began the editing and have the copyeditors laying eyes on it in early May. That's easy for me to make right now since I'm about 1/4th of the way through the first edit.

I put out the call for Beta Readers and was surprised at how many people were excited to sign up. So, I built a Beta Readers site and set up a login, then distributed access to those kind folks who are helping me out. They've earned a few perks, and I add a few more bonuses as a thank you over the next few weeks.

The book covers are being designed for my second book and my second edition of book one. I'm pretty hyped about the company I'm using but, I'll touch on that later this month.

I've caught up on Detective Comics, Batman, and All Star Batman. I've loved all of these books and the fanboy in me is loving the D.C. Comics Rebirth event. I'm glad I saved the All-Star Batman comics for last! The event is wild with the most insane Batman villains, and it has Duke Thomas coming into his own as a hero. I'm having a great time so far so I can't recommend these books enough. I'd say start with Detective Comics as Batman's super team has been brilliantly written so far! I also think I have a soft spot in my heart for Clayface right now. He's been given a chance for redemption by Batman and the things he says hit home for me. There hasn't been one book that has disappointed me so; you really can't go wrong with any of these books.

Iron Fist is on Netflix. I don't recommend it. I won't start some rhetoric on cultural misappropriation but, my biggest problem with this series is it wasn't fun. I was bored stupid by episode 6. You should probably skip this.

Marvel's Legion on Hulu is another story entirely! Don't skip this. There's something fun happening here. The storyline is surreal since it centers around a telepath. What stands out most is the 70s inspired pop culture alongside a grand soundtrack. It's fun, and although the whole season is available yet, I don't think you'll be disappointed.

Now on to video games. I picked up the Nintendo Switch and have been having a blast! I've been using it as my daily reward doled out when I finish my writing shift. This system (if you factor in inflation) is the third cheapest system ever sold! I love its portability, and the slated games are coming out are looking outstanding! More importantly, the Switch is region free, so you can make a Japanese profile and browse their e-shop, purchasing digital imports! Good job Nintendo for finally understanding the fans and changing the game once again! The new Zelda is one of the best video games of all time. I can't recommend it enough. It took me about two weeks to beat, and there's still so much to do. The system also has The Binding of Isaac which I've been powering through for the... sixth time? I love this game and can't stop playing it. The Nintendo Switch version has all the DLCs so it really should be in your collection! The Nintendo Switch was restocked this week at Toys R Us, Target, Amazon, and Best Buy so, happy hunting! I can't recommend this system enough.

I sat down with the Will Smith movie Collateral Beauty, mostly because it looked like something my wife might want to watch with me. I had a splendid time watching it. I don't want to spoil it, but it is a tear jerker that was a lot of depth to it, for me anyways. Totally worth the five buck rental on Amazon Prime.

So that's all I have this week! Next week I should be done with my first edit on my manuscript, and I'll be starting a new project while I wait for the copyeditors to dive in next month. I'll keep you posted.

I'm pretty happy to announce the 2nd edition of my first book, Goodbye from the Edge of Never. It will be available on April 28th in both print and ebook

It has been almost two years since you left, Pops, and my heart still feels tired and worn out sometimes. There's so much you've missed. So much that has changed!