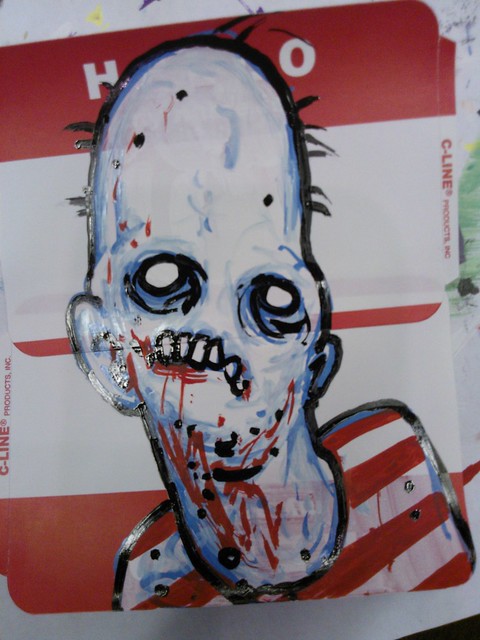 I stood there, smelling copper and biting flesh. Tasting the song of life that gushed forth and into my being. I felt Luciano Pavarotti, holding a long bassy note, its tone echoing off the walls of every opera house in the world before depositing that energetic burst right here, into my being.

I'm standing in an alleyway devouring the face of a transient but somehow, I hear Luciano Pavarotti echoing into the world. The music, I'm feasting on, becomes weak and then tastes acrid. Death and infection are taking hold. It no longer tastes like song. Letting go, I threw aside the spasming man and stepped back to watch him struggle violently with his fate. The dark shadows of the alley grew, surrounded by the fading sunlight of the world. I didn’t know how long I had stared. Just that the man was now standing before me swaying slightly, parts of his cheek and neck ripped away. I couldn't take my eyes off the large gashes and blood stained clothes. The street lights kicked on, and I needed to be somewhere else. Turning away, I stepped away from the alley. The newly dead man followed. A few steps later I spun around to face him under a streetlight. The man swayed and looked back with hollow eyes. Another step away and the man stepped forward again.

This was new! There is two of us. Car tires squealed, and Pavarotti’s note echoed past. I followed the scent of it down the street. None of this made sense to me. The note grew louder as something danced in my lungs. The man behind me lumbered along. I could hear him sniffing the air. He’d found the note too. There was clearly something here. We trampled an old flowerbed, sprinting across a parking lot until we finally found the source of the night’s music. Bright floodlights angled down, piercing the darkness. Shades of deep green and earthy browns filled my vision from somewhere. Is that applause? What is this?

Middle-aged men sprinted around the bases. From the stands, someone shouted frustration. After a minute of running someone slid into a base and the flexing movement of the crowds cheering and jeering settled down as we approached a chain link fence on the darkened side of the field.

People passed around hot dogs. Some tugged at shared blankets and dug out sweaters from backpacks. Others argued over stats and teams as they watched the players face challenges from the field below their bleacher seats. The song is coming off the crowd. You can feel it. You can smell it. You can taste it. It is life and technology breaking through the darkness. Somehow these things are finding beauty and excitement. A moment of safety, which the universe rarely knows. It is all so beautiful and hey…

Where the fuck is he going?

The newly turned undead had climbed the chain link and began sprinting across the field towards the game. Doesn’t this asshole realize I found them first. This is my song, not his.

Spitting and hissing, I climbed up the chain link. It’s difficult to scale a fence when you’re no longer fully conscious of how your legs feel.

I began chasing after my newly turned friend we found ourselves running into the lights of the field. We shuffled towards the shocked players. The crowd laughed at first. I suppose we looked amusing. Two strange individuals with obvious muscle control issues. The smell of the song engulfed us both and our steps became more sure-footed as our engine gathered steam. The right fielder approached asking if we needed help, inviting me to leap first, sinking my teeth into the man’s face. Drinking deep of the song, I glanced up to see the crowd screaming and scattering off the benches. Some holding their place behind cell phone cameras, others throwing objects in our direction. My friend leapt at the player swinging a bat in his direction. Amateur hour in the land of the dead. The newbie dusted himself off pounced again, finding his proper place on top of the batter’s struggling form. I hadn’t realized it, but I had left the field and was running towards the people rushing out of the bleachers. Vaulting over the dugout chain link and clacking my teeth, I found myself between two people. A teenage girl and an overweight middle aged man. First-world undead-problems. Both have their arms up between them defensively, frozen in fear. Their eyes are pleading for safety. Hey, that fat guy has a beard and looks like Pavarotti. In fact, he tastes like Pavarotti should!

Police and fire sirens rang out. Smoke wafted through as I chased neon lights. The song carried me up one street and down another. The feeling intensified. Sometimes I snapped a chunk of flesh from the masses. Other moments, I snapped my teeth and hissed a warning, culling the crowd. Shoving it away from me, and into some newly minted friends. They're forms screeching delight while rending flesh.

I remember standing next to a muscle bound, fresh faced undead man as he roared rage and destruction. He was probably still slightly pumped from steroids and protein shakes. A second later he was cut down by a hail of gunfire.

I bet he misses the gym.

It turns out old ladies don’t seem so old when the song found them. I observed one wearing a blue wig screaming, gnashing her teeth and climbing a street light to leap through a second-floor window.

Suddenly I was up on a roof watching a mass of undead tumble down a chimney like they were Santa Claus chasing the holiday spirit. Such a clatter.

A flash shuffles past, and I’m sprinting up a wide street, leaping up and onto a windshield. My fists are hammering down, trying to unleash the music hiding inside of the parked car. The glass flexes and resembles the white pattern of a spider's web before shattering. The screams surrounding me are pulsing with excitement.

I could hear the beat of chopper blades long before I felt the whiz of bullets. By this time, though, our mass was pulsing into and through buildings. Smashing windows and splintering wood wherever we found it. Sometimes we were beaten back… But the band played on. The night belted out hit tunes, and as it turns out, I loved to dance.

Electricity surged somewhere. I'm screaming at the moon while struggling to hold a man beneath my knuckles. My brothers and sisters latch on and begin the process of ripping him apart. I have never felt so powerful. The world has never felt so right. Confidence is trampling through here. Enlightening the masses. Liberating a beat.

I might be dead, but I have never felt so alive. Another blink and I’m standing in the seats of Yankee Stadium, just up from the third base line, gnashing my teeth into a man wearing a security jumper.

Hey, look at me! I’m in Yankee Stadium! I made it to the big show! 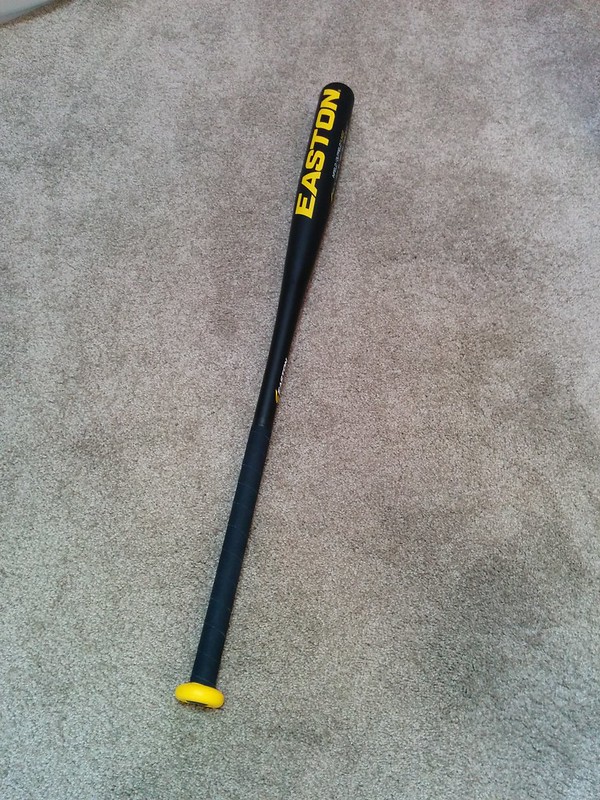 In my novels one of my main characters, Ashley, uses a baseball bat to fight the undead. She is a modern day swords-woman. She will often switch between wielding the

I played Pong. I was a Pacmaniac. I loved Super Mario Bros. I owned a Turbografx16. I sank more quarters into Street Fighter arcade machines than I care to admit,