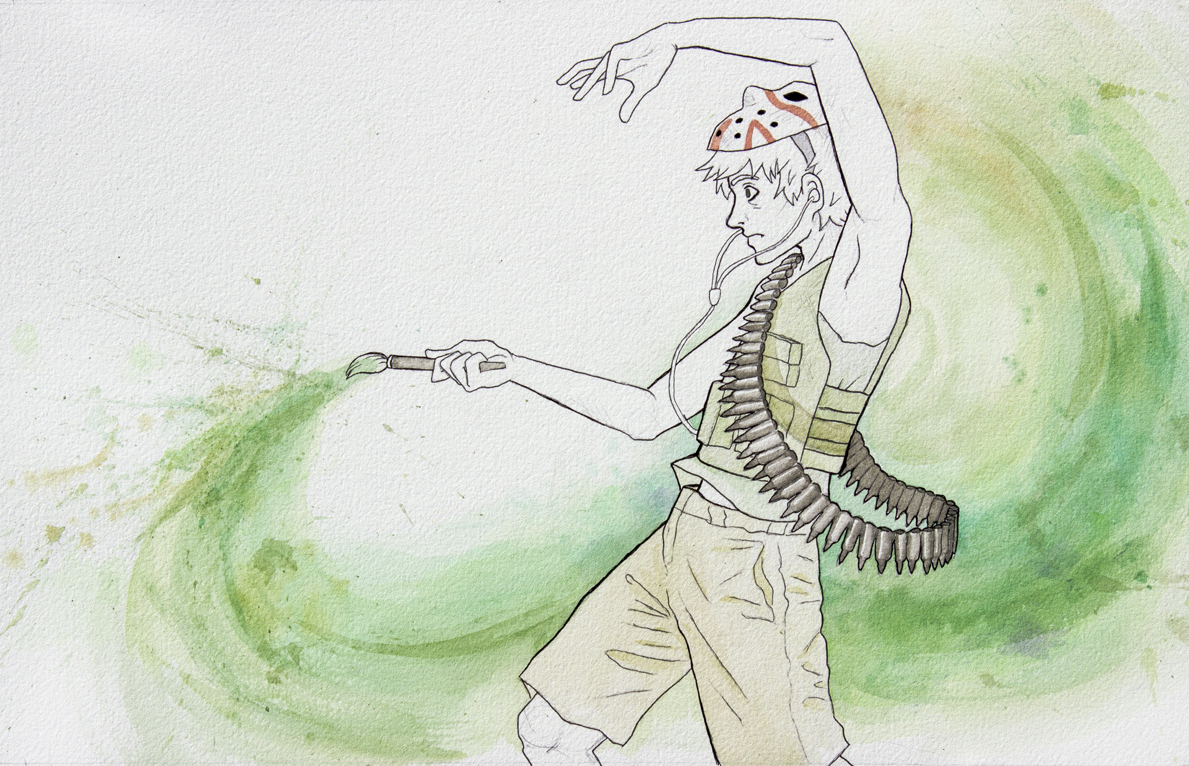 Name: Mason Meeks
Class: Artist
Weapon: M240bravo machine gun
Powers: Luck, Champion of Luck
Likes: Puppysuit theories, art supplies, art, artichokes
Dislikes: Furries
Attitude: Comical, a bit scared, neurotic for anything to do with art, will often use a hockey mask he wears as a canvas to showcase or hide behind his art.

The higher Mason climbed, the more the wooden ladder swayed. The machine gun was slung behind him with the strap partially across his right shoulder and pulling on the front of his neck. It felt like an anchor as he forced his limbs to continue working as hell erupted below. The thuk thuk sound of his feet on the wooden rungs, combined with the loud hum of the undead, the ping of an aluminum bat, and the crack of pistols firing below, began to create a slight beat. Mason felt the music rush into existence as he reached the top of the barn. Heaving the machine gun forward, he scrambled up onto the old wooden roof and gasped a second before half-running toward the front, intending to position the gun to fire down into the mob of bodies below. As he reached the middle of the roof, he halted. Bodies had already begun scrambling up over the edge and onto the roof.
Spinning around, Mason tried to take in what he was seeing. Scattered undead stood up near the edges and formed a perimeter around him. The horizon darkened as boards creaked and shuddered. “Guys...” Mason spoke to the zombies shuffling in a circle around him and stalking their prey. “This is pretty dangerous,” he added in a meager attempt to reason with the undead. Reaching up, he slowly pulled down his mask to reveal, written in calm letters, the words “Don’t Panic”—except he had scratched out the word “Don’t” with a series of frustrated lines forming an angry X mark.
Suddenly, one of the Swarm off to his left flexed its arms out and fashioned its rotting hands into fists. Straightening its arms, it swung its head forward and screamed. Others around it joined the fray, screaming a raspy, guttural roar at Mason as their bodies tensed. The flies, which had formed black masses across their eyes and pulsing black veins that hung down under the faces of the living corpses, scattered and buzzed in the air. The hollow eyes and graying flesh came into view as the creatures continued screaming and baring their teeth in hungry rage. Finally, all the screams died back into the hum as the collective undead on the rooftop all sprinted toward Mason. Wood snapped and buckled all around as the roof collapsed and Mason fell screaming into the darkness below.