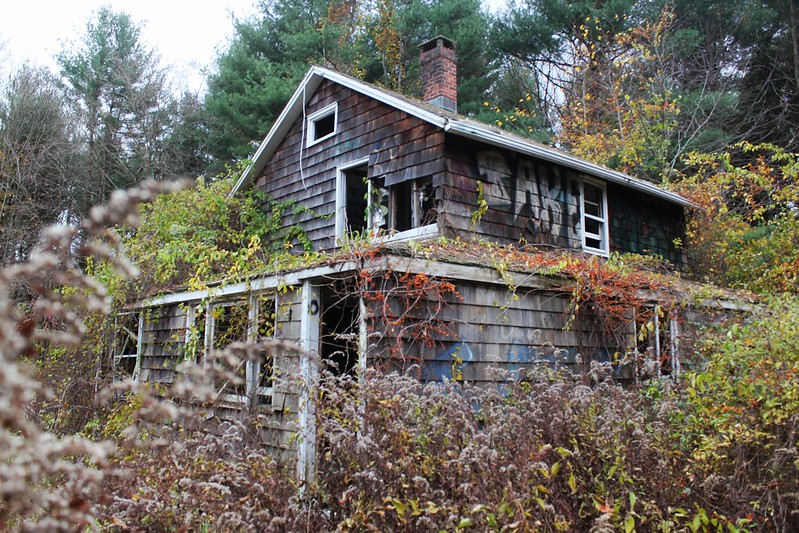 “I’m not usually one to thank God,” Jae thought as she came upon the square, two-story cabin in the moonlight. The muscles of her legs ached. One of them was spasming as she crossed the driveway and dragged herself up the front porch.

The forest behind her screeched. Deeper screams echoing behind that. She didn’t even know which of them was causing that mist to hang in the air. She had just ran the other direction.

“Fuck sound discipline. They know I’m here.” With lungs full of fire and head full of fear, she began kicking in the front door.

The wood splintered on the second kick, and she tumbled into the room. A snap and a shake later, green neon light spilled across the room from a glowstick. Jae immediately noticed the stench.

Waving the glowstick in front of her defensively, she scanned the room trying to find the source of it before it found her.

The green light flooded the floor revealing two rotten, shriveled corpses, laid side by side. Jae held her breath. A scream outside reminded her why she was here. Whispering, “ Gun please?” she stepped up and let her hands grasp old, dead flesh, shifting the corpses around, trying to find the source of their death. A pill bottle skittered out from under one of them.

She cursed as she stepped past the dead bodies. With an unsteady hand, she waved the glowstick around the room trying to find something she could use. A blender, vitamins, supplements, a bowl full of rotten fruit covered the counter of a half kitchen. A fitness bike and a rowing machine on the far side of the room next to a stairwell. Everything covered in a layer of dust still somehow managed to seem tidy. The echoes of fitness nuts in a dark world. Jae was willing to bet they wished they had lived their life a little more before the dead arrived.

There! A set of heavy, metal free weights stacked against the wall by the front door she’d walked through. There was her salvation.

Jae leaned her weight forward as the wooden steps out front thumped. The window broke sending glass shards cascading into the room. Jae had tucked the glowstick behind her and backed away. A moonlit silhouette of something scrambled through the window. Screams of hunger and rage joined it as black shapes filled up the window’s frame. The cabin’s wood was aching as the creature's siblings came to feed. Bodies flooded through the open front door as Jae sprinted back and up the stairwell. Panicked breaths danced with flashes of emerald light.
She sprinted off the stairs, down the hall and into the first open door. Jae could hear them scrambling up the stairs. Shoving and clawing over each other to get to her. It took her a moment to realize the tiny room had no windows, a toilet, and a small sink.

Turning to find another escape route, Jae found herself facing a bald man. Pockmarked skin and sunken eyes standing in the doorway, glared back at her. Jae gasped, and time seemed to freeze. Shadows shifted behind him. Like a snake, his form lurched forward, and his jaw snapped in her direction. Jae placed the heel of her sneaker in his stomach and shoved full force, slamming the thin wooden door between them in the process. She had dropped the glowstick. It lay on the bathroom tile; it’s light flooding out across it, leaving half shadows bouncing off the sink, toilet and walls. The health nuts that lived here must not have been claustrophobic. Jae leaned into the back wall; tears began rolling down her cheeks. The monsters screamed and clawed at the door. Jae spun around as her feet fell out from under her. Sitting up against the wall, she let one elbow resting on the toilet seat, her other arm on a knee staring down at her hands. A crack of wood echoed into the room. How had the world become like this. A year ago she was dancing in a club, surrounded by laughing friends. They called her Princess Jae then. A nickname of honor amongst close friend. Her head had been dizzy with alcohol. Now she was just dizzy. Everything had collapsed so fast. Sirens and alarms had only added to the fear and confusion for the living. One panicked sprint after another. Sleep stolen in hiding. She’d seen the worst things. Parents were devouring their children. Police shooting people over canned goods. Lovers were murdering each other out of both insanity and pity. When the world fell in on itself, it was sudden, and dark. No one saw it coming.

The top part of the door was ripping away, and hands stretched into the room struggling to grasp and rip flesh. Jae’s eyes focused on the metal looping drain pipe under the sink. The weight of death and the world falling in on her lifted. Jae whispered to herself the quote, “I intend to live forever, or die trying.” Her sneaker connected with the metal pipe as the bottom part of it broke and pinged against the tile floor. A second kick and she’d ripped off the other half of the pipe.

She sent the glowstick skittering across the tile as she fumbled for the two pieces of metal pipe. Rolling over onto her back Jae was suddenly very conscious of how cold the tile felt. It matched the iciness of the cold steel she was holding in both hands. Looking up at the shadows of hands and gnashing teeth through gaping holes in the door she began to giggle.

The giggle gave way to a full blown belly laugh as the dead screamed and struggled violently to fall in on top of her. In a swift motion, Jae brought both of her arms up, clapping the two pieces of metal together. A small spark flickered then fell between Jae and the dead. The spark warped the night. Glowing red characters hung in the air near it. Resembling alphanumeric digits they stretched and floated through the air. Their forms flickering and changing. It was difficult for Jae’s eyes to focus and track them. She held her breath. The steel fell from her hands, clattering on the ground next to her. Raising her right hand, she let the tips of her fingers extend into the shifting pattern. The pattern flickered around her fingers leaving trails around them in the air. Her entire hand went numb as she flexed it then pulled, redirecting the flow of symbols. The last of the door collapsed forward, undead bodies fell in toward Jae. A short-lived fault in the system of existence ripped through the room. Reality tried to correct the error and a loud whump erupted into the room. The cedar walls of the cabin flashed bright white and vanished, replaced with cold lake water. The walls of water crashed in on themselves. Pain and the sudden change of pressure caused stars to dance across Jae’s vision.

Coughing and sputtering, Jae shoved aside the tile and mud. Jae limped away from the site and the struggling undead whose feral minds were trying to come to grips with what had just happened.

I played Pong. I was a Pacmaniac. I loved Super Mario Bros. I owned a Turbografx16. I sank more quarters into Street Fighter arcade machines than I care to admit,

I spent a month rushing around to events and then I injured my back about a week and a half ago and the recovery has sucked. I was an overdose