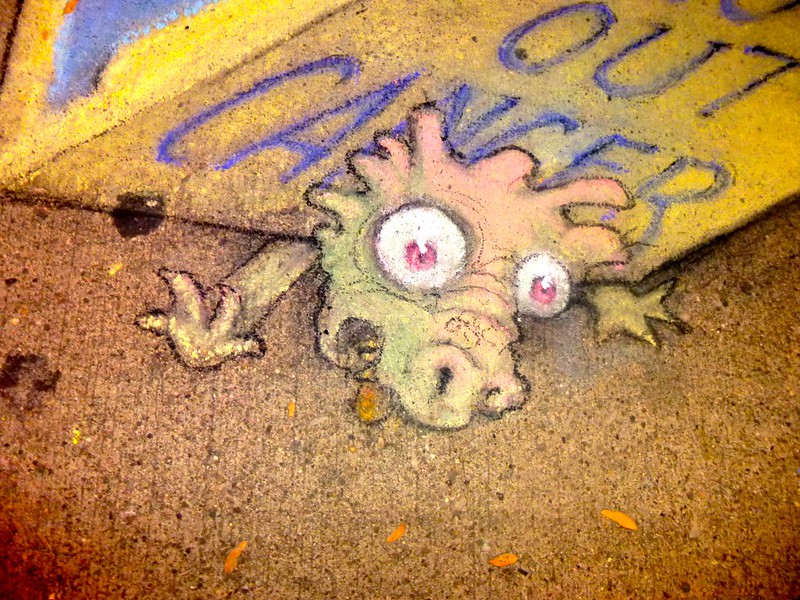 If you're lucky, your biggest heroes will be your father and grandfather.

If your luck turns, they'll run up against cancer. You'll come to their aide because that's what good people do for loved ones who have helped them grow up. You'll be by their side. You'll watch your heroes deteriorate. You'll see them struggle to keep food down and decide that the pain, nausea, and cancer have beaten them. Their body will wither. Their mind will go. They'll confuse you with their brother. They may slip away in the night. Usually though the fight was given up long before. You were just around to watch cancer's victory parade as your loved ones faded from the world.

Everyone knows the personification of Death with its grinning skull and sharpened scythe. Death has cancer beaten in sheer numbers and often cruel ends but at least death can sometimes be merciful.

If we are to imagine cancer as a personification, it won't wield a sharpened scythe that could cut people down quick. Cancer would use a knobby oversized club that wasn't accurate at all. Just brutal. Brutal in that every hit never quite kills, but it bruises and hammers the life out with every strike. Cancer would have a fang-filled mouth. It's face would be blood stained face from sucking blood, flesh and marrow from everyone it affected. Cancer would glow brightly from all the helpless, sick, irradiated victims he dragged to their demise. The eyes of cancer would be sinister beady blood red things that held gaze on the whole world but possessed pity for none. I'd want to believe that cancer would be covered in tumors that spit blood and puss with every step. Given how cruel the disease is, I'm almost certain the personification of it would have flawless skin and form. The attractive devil that smiles even as it is offering damnation. That's how I imagine cancer. Since he seems to visit my family members all the time, I imagine he'll arrive in my home one day. He'll stand across the room pointing an accusing finger at me and tell me that he's finally come knocking.

I hope science sucker-punches the shit out of you one day, cancer.

I hope it knocks all your teeth out in one shot, leaving you hungry and in pain. Cancer, when science knocks you out, I hope it robs you of every bit of dignity you've stolen from the rest of us.

Cancer has my dad and won't let go. Neither will I. Unfortunately, cancer cheats at everything and curls its grip around all the parts of him I can't hug.