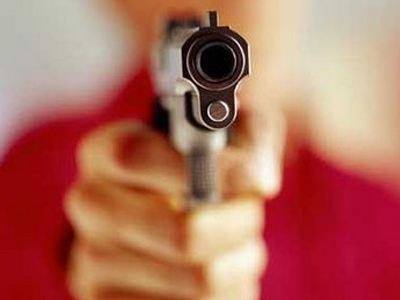 Everybody be cool. EVERYBODY JUST CALM DOWN AND BE FUCKING COOL.
I found two bags of Hot Cheetos in the cabinet and the wife is asleep so there is no one stopping me from eating these.
Don't anybody ruin this! BE FUCKING COOL!
I swear to God, be cool, Facebook. 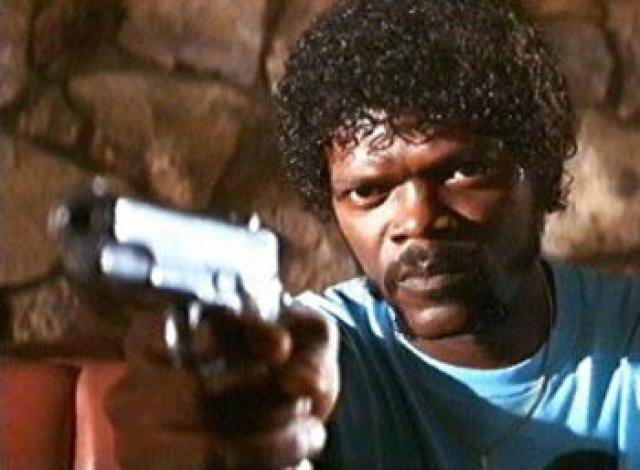 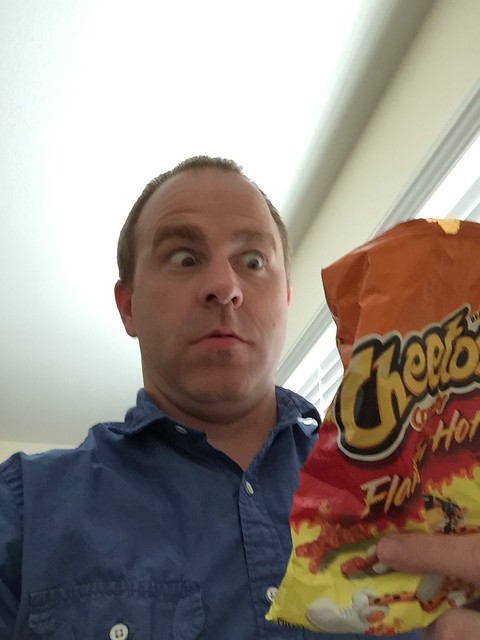 Bag number one is done. I have heard eating two bags of hot Cheetos while pulling out a nosehair is how President Kennedy died. 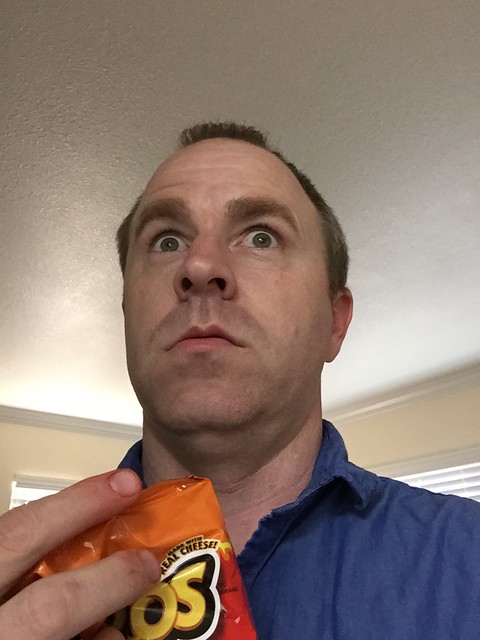 Shit is getting real.

Dude. Do I have a lazy eye? I've been wondering what is up with my vision lately. This would explain a lot.

I have a bad stomach ache. I take ambien and head to bed.

I just woke up from some strange nightmare and had to write it down. I'm hanging out with these people near some mountain chain and cliffs that somehow have this huge parking garage near it. Three of the guys coming up the cliffs are brainwashers for some cult called The Children of Jonathan Landis. (I got nothing.)

They keep chasing me around trying to talk to me about Crocodile Initiatives and how they will improve my life. They each have red eyes and are wearing khakis. Each time I'm like screaming and running with weird psychic bullets pinging and whizzing. Somehow I managed to get into the parking garage and lower it with folks who I think are safe. I can see the brainwasher dudes on the other side through a big metal grate that has locked us in. They get frustrated. The parking garage is totally huge. I wander off from the folks I used to know and find Christopher J Garcia. He's eating breakfast on some cafe table, kind of in the dark of the huge parking garage. I order some orange juice and food. We are chatting awhile. I ask about his kids and Vanessa. He's like, "They are doing great, but they are concerned about you."

"Oh," I ask in a confused tone as I reach for my orange juice.

Chris replies, "Yes, what's this I hear about you not wanting to talk about the Crocodile Initiatives?"

My blood runs cold as I stopped just short of grabbing my orange juice, frozen, staring down at it, refusing to look up at Chris.

Chris says in a calm voice, "It's so peaceful you know, as a Child of Jonathan Landis. You should know this peace. I've let them in. Into the parking garage."

I hear voices in the distance, echoing off the cement walls and ceiling. They are getting closer. I still can't force myself to look up from the orange juice. Finally, after what seems like an eternity, I look up slowly in Chris' direction and whisper, "You used to be a fucking God among men. A fucking God! Now look at you. Khakis and shit."

I go running back off into the darkness as Chris yells out, "Plenty of Khakis for you in the Children of Jonathan Landis!"

Chris' voice and the yelling sound farther away as I scream out, "Fucking Khakis man!"

I happen to find Derek McCaw sitting at a tiny cafe table near the edge of the parking garage. Not far off from the front. He's glowing in the golden rays of morning falling in from the sky past the parking garage security grate fencing.

He looks very official, sitting there reading his paper with a coffee in front of him. He sits up tall and shakes his paper. I run to the table and begin shouting about Crocodiles and Khakis and Chris Garcia and Jonathan Landis.

Derek is like, "Calm down! Calm down Steve. It's going to be okay." He hugs me. I finally feel like I've found a friend in the darkness.

"Now? Jonathan Landis?" Derek asks. "We should probably run to the edge of the parking garage and shout for help."

Thank God Derek doesn't sound crazy. We both sprint twenty feet and then stop for a break where we rip open packs of Disney miniatures. I had no idea that Isaac from the Binding of Isaac was a Disney miniature now. Derek laughs and says "Yea! Disney owns everything after all." We set down all the miniatures and continue running towards the fence. When we get there, I'm screaming "Help! Help!" I jump up on some weird cement block with my arms reached in between these big gaps in the metal grate. I'm begging for anyone to open the gate, and take the nightmare away. There are people camping in a forest on the edge of the cliff. They notice us and begin running towards us. I can see all these green trees in the background.

Derek is standing behind me, and he asks matter of factly, "Did you know there's someone even more powerful than Disney? They own Disney in fact." He pauses to draw in a long breath before adding, "They just want to talk to you about the Crocodile initiatives."

My whole soul is screaming, and my heart feels like it is about to rip out of my chest. "You too DEREK? FUCKING YOU TOO? YOU'RE DICK DEEP IN KHAKIS?"

Derek looks like he's trying to reason with me, "Look man. Khakis aren't all bad."

"They are the clown shoes of pants. People iron creases in them that can cut bread." My voice is trembling while I whisper, "From you I'd expect the Avengers initiative. Never the Crocodile one."

"FUCKING RIC IS A CHILD OF JONATHAN LANDIS TOO?!" I start to run, but it's too late. The parking garage is filled with ping sounds, and cement popping and hissing, as I'm surrounded by the brainwashing guys, led to me by Ric and Derek.

The three brainwashing dudes have circled me. They are all wearing khakis, but they have white shirts with off white cashmere sweaters draped over their shoulders so just sort of dangle off them as they talk. They are rambling on and on about Crocodile initiatives. Their khakis are so pressed. I listen for a minute. The sound filling my ears is ringing. Overwhelming. My stomach churns. Finally, I just haul off and punch one square in the face.

My voice is hanging somewhere between maniacal laughter and mania, "Yea you khaki wearing son of a bitch!" I raise my fist in defiance. "More where that came from!"

The brainwasher dude blinks at me a few times. His eyes don't look so red anymore. He asks where his wife is.

I hold my fist just inches from my face, staring at it. It is covered in blood. "Holy shit. My fist was the answer. All along I could have cured this. I just needed to punch all these brainwashed cultists in the face, hard."

I punch the other two brainwashers in the face. One complains that I'm hitting him, and now his tooth is loose.

I sprint through the parking garage and find Derek and Ric eating salads and talking about ordering new Khakis on Amazon. I punch them in the face. They both thank me for saving their souls. Finally, I track down Chris Garcia. He's sitting on a couch, petting his khakis.

"Chris, I'm sorry. I have to punch you in the face. It is for your own good."

Chris looks up at me and asks, "Will I still love Khakis after?"

I shake my head no. His eyes look far off, "I don't want to live in a world where I don't love Khakis and can't roll for Crocodile Initiatives. (Again. I got nothing. The dream has changed something around me.)

I punch Chris hard in the face. He has a slight bloody nose.
"Ow!" Chris protests. "Why the fuck am I wearing khakis?"

I reply while smiling, "I don't know Chris." I wake up from my dream and suddenly sit up in bed.

I took a piss. Grabbed my computer and wrote this whole thing out at 4:35 am. There's probably a lot of errors, but I'm not going to bother fixing them. I'm just heading back to bed.
There is a pair of khakis in my closet. They are wrinkled, but I can feel their evil power. 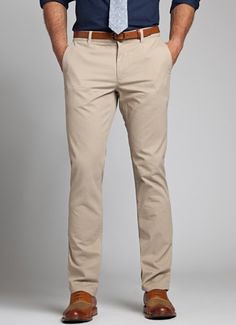 A dark haired Asian girl climbed over some of the rubble that littered the back entrance to the mansion. An aluminum baseball bat strapped across her back. Its hilt perched